Born in Atlanta, Georgia, Alea Hurst began her journey into drawing and painting in high school. She produces two-dimensional works, particularly drawings and paintings, which range from traditional to experimental and mixed media approaches. She received her Bachelor of Fine Arts degree in Painting and Bachelor of Business Administration from the University of Georgia in Athens in 2013 and her Master of Fine Arts degree at the Savannah College of Art and Design in 2018. Her work has been exhibited nationally and internationally including Artist’s Republic Gallery, Beep Beep Gallery, Hartsfield-Jackson International Airport, and Mason Murer Fine Art’s Fresh Blood. Her work also has been featured in multiple publications, purchased by the State Botanical Garden of Georgia and is featured in the series 4 bottle labels for Collective Arts Brewing in Ontario, Canada. Her current work focuses on the roles of masks and reversing those roles to comment on the evolution of society. 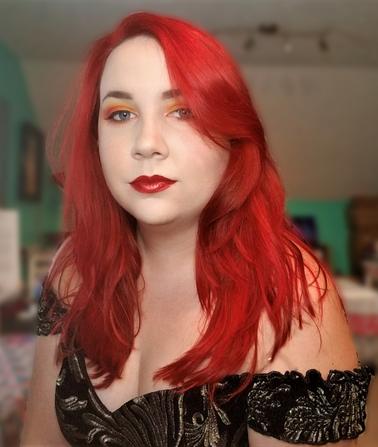 "In this century we have made remarkable material progress, but basically we are the same as we were thousands of years ago."  -Tenzin Gyatso

Foremost in my work, I am experimenting with painting in a new way by prepping and priming fabric for oil painting, as well as, other traditional and non-traditional materials. I am attracted to pattern in my work and picking the fabric or pattern specifically for each painting becomes part of my creative process. The fabric also plays another key role; I let the fabric show through in unexpected areas. Sometimes it is left alone, others it has been glazed over to form the clothes themselves. This creates an illusion often making it difficult to tell what is actually painted and what is not.

This body of work explores the role of the mask and reverses its purpose. Traditionally, a mask is worn over the face to hide something. This can either be to conceal the wearer's identity or to cover up unsightly features; however, in my paintings, the mask reveals information instead of hiding it. The masks become representative of the characteristics of the wearer's soul or personality. Each hints at some inner strength or flaw of the person being depicted, and the traits that were wished to be kept secret are now the focus of the portrait and revealed by the mask. I also draw influence from the fact that throughout the ages the eyes have been called the windows to the soul. Since I am dealing with the characteristics or archetypes of people's souls, it is for this reason I always leave the eyes open to the pattern as if the viewer can peer straight into it. They are empty inside because their innermost being is on public display; there is nothing left to hide.

The masks I depict tend to be from ancient cultures, whether by being authentic from the time period or a reproduction that instills the same characteristics. The old world appearance of each mask is offset by the contemporary garments being worn in the portrait. The fashion status of each subject is of importance, it is representative of upper class society and how far they have advanced in a material and monetary sense. The high class business attire of the models is disconnected with the ancient and tribal based masks and juxtaposes the primitive with the refined. The concept is to explore the idea that no matter how far society has evolved, the basic instincts and personality traits of ancient cultures still prevail. Archetypes still recur age after age no matter how advanced the society. Ultimately, we have not come as far as we think.